Building a Great Society of Art 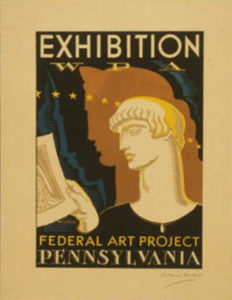 Kulture Partners advocates for a society of art – one that values not only works of art, but also the people who create them. While that may sound like an unattainable goal, there was actually a time when American society literally valued art. During the Great Depression, the US government funded a massive public arts initiative under the Works Progress Administration (WPA) called the Federal Art Project. Through the FAP, the federal government paid unemployed artists to decorate public buildings and spaces with murals and sculptures, as well as to produce paintings, prints, drawings, and crafts. The ultimate outcome of these projects was more than beautiful public spaces, however. It also fostered an environment of community through cooperation and shared history.

Unfortunately, many Americans know very little about the FAP. Many of the artworks are lost to history (though, many still exists, if you know where to look). It is also largely overshadowed by the massive works of its parent organization, such as massive construction projects like the Hoover Dam and Lincoln Tunnel. Still, the FAP accounted for a significant percentage of the overall WPA budget and was responsible for the production of many thousands of artworks in the form of murals, sculptures, prints, posters, crafts, and more. The works were also produced in a wide array of styles by a vast number of otherwise unemployed artists. 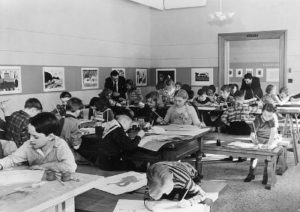 The Federal Art Project was responsible for more than the production of art. It also helped to create an audience and appreciation for art and artists by establishing community art centers and galleries across the country. This helped to introduce the public to artists and their works, often in areas where the fine arts & crafts rarely reached. The cultural significance of art was highlighted by FAP Director Holger Cahill in 1936 when he stated, “The organization of the Project has proceeded on the principle that it is not the solitary genius but a sound general movement which maintains art as a vital, functioning part of any cultural scheme. Art is not a matter of rare, occasional masterpieces.”
( https://www.britannica.com/topic/WPA-Federal-Art-Project )

Much of what we now consider “American” art and craft came out of the FAP initiative. It influenced art broadly (both in the US and internationally) and helped to shape our cultural identity. Iconic murals celebrated the American people and the labor of American workers. Great American artists and photographers like Jackson Pollock, Ansel Adams, and Dorothea Lange emerged from the FAP and similar federally-funded arts initiatives. The work of the FAP and other programs introduced millions of Americans to the arts, but also to new ideas and new places. The FAP generated art that publicized America’s national parks, made newly accessible by WPA development. Almost a century later, we continue to benefit from these investments as they inspire artists and draw visitors from around the world.

While not perfect – the initiative did exist in an era of extreme racism and segregation, after all — The FPA stands as an example of how we can build a great society of art. It shows that government can play a central and essential role in the creation and promotion of art and culture. It also demonstrates that government investment in the arts has benefits that cannot only be measured financially, but also in terms of community development and the creation of a shared cultural heritage. As we continue to debate federal and state spending on the arts, we need to look to big projects like the FPA for inspiration. We have done these things before, and we can do them again.

Could Kulture Partners help you?

We're here to help you do great things! Send us a message, right now, to find out if we're a good fit. Someone will contact you to discuss your specific goals.

Don't worry, we are NOT a high-pressure agency.

"Art is a movement of a human soul shaping itself

“Painting is poetry that is seen rather than fel

”Your value is the product of your thoughts. Do

“There is no must in art because art is free.”

“If art has a purpose, it is to interpret life,

“Don't be an art critic, but paint, there lies s